MY NOT SO TRIUMPHANT RETURN TO WORK 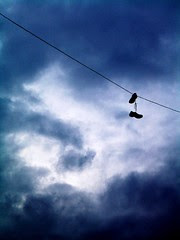 So yeah, my waitress career is over and I'm a real writer. Almost. But at least for a couple more months, I've got to keep the grats flowing in order to pay the bills. This Sunday, after a delirious week of walking around my house being impressed with myself and insisting others do the same, I returned to the maelstrom. That's right: waitress world. At work, the only thing impressive about me is that I can deliver a martini straight up without spilling a single drop, and I'm known for keeping my tables clear.

My first problem with my not so triumphant return occurred when I tried to get dressed. Never had that uniform look so shabby. My black pants are pilled and frayed around the bottom, and I don't have a single tux shirt that's not stained with au jus or cocktail sauce. And those ugly ass shoes! Only after I photographed them did I realize how bad they looked. So while I might save them to hang over my head as some kind of Damacles Sword, I was definitely not putting them on my feet again.

Instead, I looked around my closet and found an old pair that looked practically new. Why had I walked around in those horrendous holey clunkers when I had another perfectly good pair of ugly black shoes sitting in the closet? I laced them up, and put on my bow tie.

The event of the day was a Greek Christening, which is really more like a wedding with music and great ethnic dancing, which always sends me running into the kitchen to practice my moves. While a couple of the servers complained about the music, I felt like it carried me through the day--even when my feet began to hurt in my cramped shoes. About an hour into the shift, I remembered why I had tossed the practically new pair into the corner of my closet. They didn't fit!

Meanwhile, some people looked at me kind of funny--me and my fancy book deal. Not my friends, of course, and not my favorite dishwashers, who don't know about book deals and couldn't care less, but some people.

My boss, for instance, the one who always winces when she looks at my hair, especially during frizzy season. "Curly hair is always such a problem, isn't it? Maybe you could cut it really short," she says, though it's obvious that, in her eyes the only solution for hair like mine is to shave it bald. But aside from such helpful suggestions, she's largely unaware that "the staff" has a life beyond the uniform.

Anyway, a couple of times I caught her looking me up and down. Fairly quickly, she seemed to decide that I was as unimpressive and frizzy headed as I'd always been.

"Do you think you could set up the place card table?" she said in place of hello.

Around the middle of the shift, however, she cracked. "So I heard you sold your book. Congratulations."

"Thank you," I said, smiling politely, despite the fact that at that point, my pinched feet were my only reality.

"So is it at Barnes and Noble?" she asked.

"Well, no. Actually, it takes some time to publish it. It won't be out for more than a year."

"Oh," she said, looking at me dubiously.

Then she went off to cut the cake. Immediately, the lady cook who loves to watch the cake being cut, was at her side. There's something about watching as the cake is sliced and distributed onto plates that brings out the lady cook's voluble side.

When I came in to get a tray of cake, she was talking about a letter she'd gotten this week from her son in Iraq. I could tell she must have read it over many times. She recited it almost verbatim.

The boss winced uncomfortably and concentrated doggedly on the cake. She seemed to be hoping that if she made no response, the cook would eventually be quiet.

No dice. When I came back for a second tray, the cook was still talking about her son. She related all his clothing sizes. Large shirt. Size 30 pants. 8 1/2 shoes. Medium boxers. Only wears white socks. Every week, she said, she takes all his clothes out of the drawers and rewashes them, then folds them and puts them back. She doesn't know why.

The boss rolled her eyes. Later, she said she didn't think she'd cut the cake again.

"Honestly, I don't know how you guys put up with it. That woman never stops talking."

"People like her have been the best part of the job for me," I said.

But the boss was already walking away. "Do you think you could get a spray bottle and wipe down that counter?"

Memories. Uggh, I waitressed through most of high school & part of college at country clubs. I believe I vowed to burn the uniform, but in hindsight it taught me a lot about human nature including my own!

Will you be making pies for T'giving? I'm making apple.

suzanne: Service jobs of all kinds are definitely a great school of human nature. And you're so right: they also teach you a lot about yourself. Sometimes I wonder what I'll write about when I quit for good. But I'm sure there will be something.

Susan: Great to see you here, and thank you for your kind words. Actually, I get off pretty easily on Thanksgiving. Ted makes the meal. I do appetizers and dessert. This year, however, other people are bringing most of the pies. I'm just making a lazy muse version of chocolate cream.

Are life's transitions ever smooth? Seems like you ferret out the beauty, the juiciness in all the roughness between ill-fitting layers. :-)

The things we do for our art. :-) Your job sounds like great fodder for a novel. You can use all those fellow workers as characters.

I love this story, Patry, because soon you WILL look back on it and laugh fondly at those good ole' waittressing days.

Would you care to share an essay with my blog-readers? Every wednesday I post a new essay of some kind by a writer I admire.

Consider it. Email me.

Shoes that don't fit is such a great metaphor for your waitressing job!

A great story full of your customary touches of humanity. Would those be the "holey clunkers" dangling from the power line in the photo? If so, well aimed!

susan,m: Hum? Apple? Sounds like you are up to something. I remember the good luck both of you have had from the blueberry ones. H: finally got around to reading the art of seduction. Loved it and your follow up. ps.... won't have to deal much longer with those waitress shoes.xxx

I used to bartend and waitress. I always love your posts about your job. But honestly, you can write about anything and hold my interest. You were definitely born to write.

Patry, congrats on your first novel being published. And no a two years delay until publication does not seem unusual. Lots to celebrate - Happy Thanksgiving by the way.

The boss woman is obviously green with jealousy and trying to put you in your place - ie "you're still just a waitress, don't forget it" etc.
I admire your coolness in not responding to this. Bravo, Patry.

I bet it must feel different though... Because you KNOW that this is a countdown actually... You ARE on your way out of there so this is not a step back! And your sense of humour tells me you don't feel it is...

moose: Not only are transitions never smooth, but you never escape what you think you're running from--only meet it in a new guise.

Amy: I always believe my stories and characters are "purely fictional" but
I suppose that in some oblique way the lady cook and the insensitive boss will find their way into my stories.

Jordan: Yes! And thank you! I'll email you once I've recovered from my T-day gluttony. Hope you had a good one!

r.d.: I loved your words. And amazingly--until I read them, I wasn't totally aware of exactly how bad a fit that job was for me.

p.v.: I only wish they were my shoes, but unfortunately I still have to wear them a few more times.

Katrina: Thanks so much for your kind words. People who have waited tables at one time or another form a huge club. The only thing I really regret about it is the time I wasted "slinging hash" when I desperately wanted to be home writing. Well, now that time is here. So no regrets, really.

Thanks, Nick. Hope your back is feeling better.

Natalie: Interesting insight--and I think you're right--especially about her wanting to remind me I'm still under her thumb.

Irina: You've nailed it. Nothing that happens there can really bother me now--not that it bothered me much before, but now it's really over.

Patry Francis said...
This comment has been removed by a blog administrator.
9:14 PM

My back's seen better days. But thanks for asking, Patry.