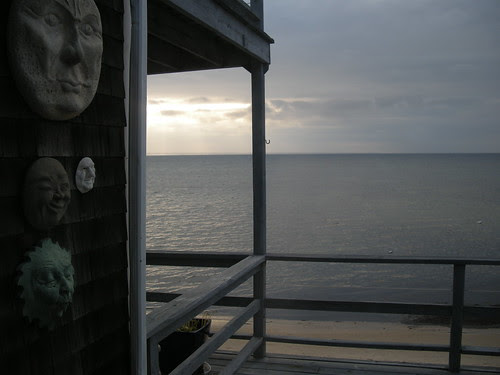 (The view from my daughter's rented condo)

For years, my mother has been telling us about a movie that had a great impact on her in high school. Her older sister saw it first; and when she got home, she crawled into bed with my mother and spilled the entire story, bringing it to vivid life in the darkness. Somehow it encapsulated all the fears, the fragile dreams, and the dazzling romance they must have felt coming of age in a time of war.

The older sister was gorgeous and confident; my mother was shy and unaware of her own emerging beauty. She didn't care that her sister had spoiled the ending. Mom scraped together the money for a bus ticket to Boston to see the movie the very next day.

With the advent of DVDs, my mother has often asked if anyone could find Waterloo Bridge. Every now and then I check the SAVED section of my queue on Netflix to see if it's available, but the release date always remains tantalizingly unknown. Just out of reach. Sort of like the past itself.

Then, this month for my mother's birthday, my incredibly thoughtful daughter tracked down the video. The first week Mom watched it twice a day.

However, privately she confessed disappointment. She still loved the story and Vivien Leigh; Robert Taylor was as handsome as he ever was; but the movie didn't have the same resonance it had when she'd first seen it at sixteen.

"I just don't feel things the way I used to," she said, looking stunned by the discovery.

Of course, I eventually realized it wasn't the movie she loved so much. It was the memory of a sister's attention; it was their shared youthful longings captured in tangible celluloid.

And I also realized how important it is to make an effort to listen with respect and interest to my mother's repetitive stories. Not just because it's the right thing to do, but because it's also the smart thing to do.

When I do, I occasionally see the forest gleaming through the trees. And sometimes I even see my own life a little more clearly. Just today I was wondering if I feel things as vividly as I used to.

The answer, of course, is no.

And even more vividly than ever.