ONE FOOT IN FRONT OF THE OTHER 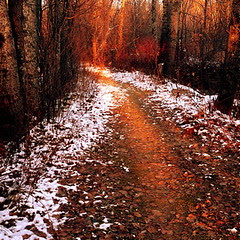 Sunrise on my wild path!
Originally uploaded by denis collette
There are millions of blogs out there, and in my fascination with diaries of all kinds, I've probably visited hundreds of them. Many are worthwhile and artfully done though I only stop by once or twice. But a couple dozen captured my attention sufficiently that I eventually listed them on my sidebar. Some I checked on weekly, and others just a few times a year, but I always came back.

It's as difficult to explain why one blogger speaks to us in a particular way as it is to describe the mystery of any friendship. Maybe I returned to certain sites because they were asking the same questions I was. Or maybe it was because their answers were better than mine. More beautiful. Truer. Deeper.

One such blogger was Michael who posted photographs and poetry at One Foot in Front of the Other. Michael had been living with a rare cancer for six years, and occasionally he mentioned the anxiety of an upcoming blood test,or another health issue, but that was never the focus of his blog. Mostly, he chronicled his love for all things Japanese, for New York City, and the chess players he photographed in Washington Square Park, for his work at a New Jersey newspaper.

He was frequently wise, and always honest.

Michael visited here, too, but the only time I heard from him directly was in early December after he'd learned of my illness. He offered encouragement and wished me well, but didn't mention his own deteriorating health.

Only after I visited his blog did I discover that that while he was sending me his good thoughts, Michael himself was dying.

In his last month, he wrote about his pain and his fears, about saying goodbye to friends and giving up his cats, but also about the simple joy of a cup of tea. And as always, he wrote about the kindness and the love--the great and incredible goodness he saw in the world around him. He cited his faults and claimed he didn't deserve it, but there it was--"sunrise on his wild path" as photographer Denis Collette aptly titled the photo above.

Michael's last entry was on January 3rd. It was a poem about looking in the mirror and encountering death. But it ended with a personal triumph, a sense of blessedness.

After that, I was almost afraid to return, and when I did, there were no new posts. The poem, I believed, was his final message to us.

Yesterday I went back and found that his sister had posted two photographs of Michael. She'd also written eloquently about his final weeks, and his death on January 15th. How can I describe my sorrow for this stranger, this friend I never met? Late at night, I sat up in my room in the dark, and pondered it.

But Michael left more behind than sorrow. In a photograph taken after a religious ceremony that was held shortly before his death, he is wasted, but beautiful.

"This picture," he said, "shows all the good and all the evil I've ever done in my life."

They are interesting words from a man whose best photographs were always portraits.

People speak about cancer victims winning or losing their battles with the disease, but I don't see it that way. I think that all of us, both the healthy and the sick, do as the name of Michael's blog describes.

We put one foot in front of the other and keep going. We try to love the world as we find it; and in the end, when we encounter death in the mirror as Michael did, we hope the good overcomes the evil.