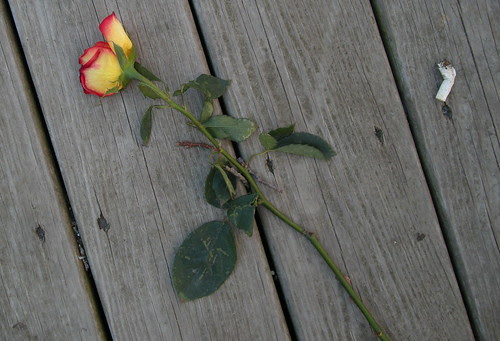 The other day my weekly newsletter from the always luminous and thought-provoking Fiona Robyn arrived in my in-box. A Confession, Fiona called this week’s message. After sharing some particularly candid insights on the subject of malice, she left her readers with this question:

What kinds of malice and cunning do you use? How does it feel to admit them to yourself or to others?

I immeiately wrote back to say that I planned to blog the answer. But then, I plan to do a lot of things. Fiona wished me luck.

As I’ve said before, procrastination is bad, but it isn’t ALL bad--particularly for a writer. While I put off writing about the forms malice takes in my life, I had a few days to observe them.

Sunday, in the happy aisles of Trader Joe’s, I had an unlikely encounter with my own meanness. The store is always crowded on weekends, but this week, the small space was clotted with an army of desperate lovers seeking pink gerber daisies, scentless roses and Belgian chocolate. Access to the few food items I wanted, not to mention movement, was blocked at every turn by a crush of carts, organic food lovers, and miserable valentines who were obviously infuriated that everyone else was in THEIR way.

Me, too. Infuriated--particularly at the guy who pushed his way in front of me repeatedly and then gave me a scornful look for his trouble. Oh, I know all about people like you, I thought, huffily. People who think they have a divine right to be FIRST wherever they go.

So I glared and I grumbled and I thought a lot of crappy thoughts about how arrogant and selfish the rest of the human race was. And then I stopped. Right there in the frozen food aisle where I’d been jockeying for position near the veggie burritos. I brought my cart to a halt ( I know, almost a crime against humanity in that situation) and took a look at myself.

What was I doing? What kind of thoughts had I invited into my brain? When someone gave me a not so gentle nudge, I moved along--but in an entirely different direction of mind. I made a conscious effort to smile at my fellow grumblers, to compliment them on the flowers spilling from their cart, or their brightly colored scarves. A couple of them shared some satisfying complaints about the madness in the aisles. I couldn’t believe how congenial they all were, how like me! I even smiled at the man with the Divine Right--though that seemed to annoy him even more than my desire to get to the avodcados.

Nice story, right? Particularly the latter part where I come off sounding pretty wise and cool. A regular yogini. But Fiona’s question deserves a more honest response, and the truth is I don’t stop and pivot nearly enough. In fact, the first part of the story probably tells a deeper truth. When I feel malice, I do a lot of talking, both internally and externally. If someone does something I don’t like, I tell them about it--otherwise known as complaining and criticizing. And if that doesn’t work (which it almost ever does) I escalate the volume or the meanness--or both (even less effective.)

And then, when the world refuses to change at my behest, I make my head into an echo chamber. I walk through the house or the hours of my life, carrying on a running monologue about my grievances. I treat my life like the overcrowded aisle of a supermarket where lots of (mostly imaginary) people and things are in my way.

Pretty futile, I admit. I mean, would the man with the Divine Right to be First have changed if I rammed my cart into his posterior and pointed out that he was an arrogant jerk? Or if I walked around thinking about it for a week? Or if I told all of YOU? No, he wouldn’t and he wouldn’t suffer either. Not a whit. But I would--which is what I do with most of my malice. I turn it on myself. Or on those who love me enough to listen.

Which brings me to the second part of Fiona’s question: How does it feel to admit that?

Well, the honest answer is not good. Not good at all. But it also feels just a little bit hopeful. Because if I can say it out loud. If I can write it on the bleeping internet, then maybe I can alter it.

Today one of my Facebook friends posted this quote:

I once had a garden filled with flowers that grew only on dark thoughts but they needed constant attention & one day I decided I had better things to do. ~ Story People

I love the quote, but I also recognize that it’s not so simple. I personally have decided I had better thing to do countless times, but the dark garden continued to create new shoots. When I was younger, maybe even last year when I made Goodwill toward all! my simple little New Years resolution, I believed I could eradicate them for good. Now I suspect that short of achieving Nirvana, the black flowers never entirely go away. They're part of that miserable, wondrous, entirely mysterious thing we call the human condition. But that doesn’t mean you need to water them. Or take them in the house and put them in a vase. Or walk around holding them in your hands like a bride.

Maybe that’s why this year my resolutions were more modest: smile more. And laugh even more often. Notice the color of people’s scarves, and the flowers they buy for people they love.

It won’t make you a saint or eradicate every trace of malice in your heart, but I can tell you one thing I’ve learned since January first: It’s almost impossible to hold a crappy thought in your head when you’re smiling.
Posted by Patry Francis at 1:03 PM 30 comments: