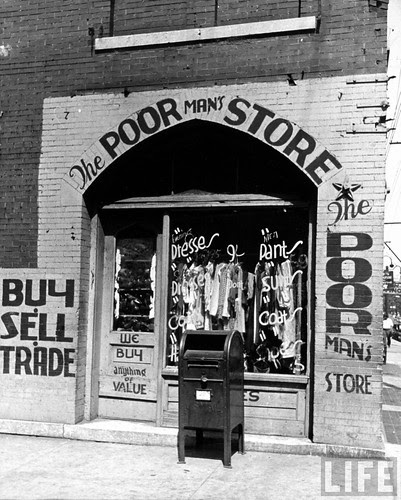 A few years ago, my son Gabe gave me a book about the Great Depression by Robert Mcelvaine. I enjoy history, but there was something, well, depressing, about the photograph on the cover. Several times I put it on my bedside table, intending to read it, but inevitably it drifted to the bottom of the stack. Fiction felt more compelling, more relevant. Hah.

Then we started hearing the threats from the politicians, the talk show radio show dudes (both the reasonably sane and the completely off the rails.) If we didn't do this or that, we wouldn't just face something like that depressing photograph depicted. We'd find ourselves in midst of something far worse. Imaginations ran rampant--at least, mine did. I picked up the book with the grainy photograph on the cover and read, transfixed.

Last November, the Boston Globe ran a story about what Depression 2 might look like. In their vision of the economic apocalypse, unemployed familes would move into overcrowded houses where the unemployed multitude would spend their days huddled up behind the blue light of the TV screen eating cheap processed food. It sounded kind of like staying home from school sick in the sixties. I could almost picture the folding TV trays and taste the chicken noodle soup. It was both a comforting scenario, and well--depressing. (Couldn't they at least have envisioned us reading?) Surprisingly, lot of readers reacted with outrage: A respected newspaper openly speculating on how the economic crisis might play out? How tacky! Are they trying to ruin our day? Create panic maybe? Depress consumerism?

I, for one, think we should talk about it. In fact, there has never been a more important time to share our fears (generally they lose power when brought into the open air) to share our ideas...and especially to share our HOPE.

So here's my dos pesos:

I think President Obama is grappling seriously and thoughtfully with the problem, and I'm thankful to have such an intelligent, steady leader...but I also believe that this train left the station a long time ago. The best we can do now is to slow it down, hope the damage isn't as bad as it looks like it might be, and get as many people off the tracks as possible.

I believe the way we live our lives is going to change--maybe in small, temporary ways, but more likely, the transformation will test us in ways we've never been tried before.

Don't get me wrong; I don't romanticize poverty. I've been poor myself, but I have no illusions: being poor in good times is a helluva lot different than it is in the not so good ones. The suffering that's already begun for many families and individuals is real and immense. My mother grew up in a large family in the Great Depression. Though her father always retained a job, they still lost their house, and were forced to cram into a tenement apartment, to help out unemployed relatives. My mother shared a small bedroom with three sisters; one brother slept on the couch in the winter and in a tent in the summer (with a bunch of other boys in a kind of Spanky and Our Gang atmosphere. ) Another brother was forced to sleep in a crib in his parents room till he was six because there was nowhere else to put him.

She remembers the deplorable condition of the charity hospital where her uncle was dying of diabetes in the pre-insulin days, and how her parents wept when they saw him there, surrounded by flies. But the next day her mother returned to the hospital and brought her brother-in-law back to the crowded apartment where she cared for him for the rest of his life.

She remembers how everything was used, stretched, saved to make their meals, but when a hobo came to the door to beg dinner, there was always enough to share.

However, the Depression didn't affect everyone in the same way; and it was those obvious class divisions, the shame associated with poverty, that seemed to leave the deepest scars. Some children who went to school with my mother had bicycles and new clothes and maids to clean their homes. She never forgot the humiliation of staying behind in the classroom with two other poor children because her parents didn't have a dime to give her for the field trip.

And here's the irony. My mother recalls the Depression as the "worst time ever;" but I have never heard anyone speak more fondly of their early years than my mother and her siblings. Their's wasn't just a happy childhood; it was a profoundly happy one.

Eventually, the uncle who was forced to sleep in a crib till he was six won a scholarship to Harvard and went on to become an important man in the world. At his retirement party, he spoke movingly about the foundation his life had been built on: the discipline to meet challenges head-on, humility, and the true source of that profoundly happy childhood: love. 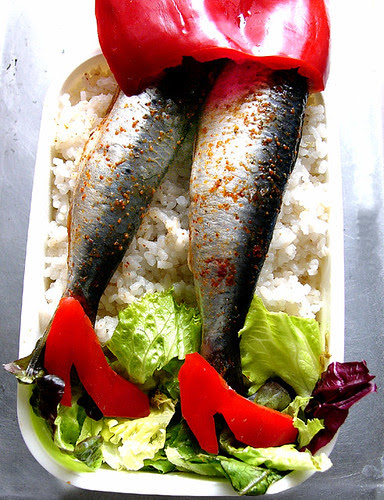 
What happened to my blog? I wanted to write...I thought about writing. Almost every day I thought about writing. But instead I lurked on other blogs...I took naps...I read exalted literature and watched trashy TV shows...I told myself I would do it tomorrow...Maybe. There were so many good things to read elsewhere and I had no story to tell. I drifted back to sleep.

But in the end, or in the middle, where we are now, there was no way I could leave my blog frozen forever on the Horrible and the Miserable. After five months of looking at that dispiriting title, I figured it was about time to change the subject. I could talk about something else. Anything else. Sardines, for instance.

But before we get to that, the health update. The good news is that, nurtured by family and friends, by those of you who were kind enough to check in on me, by exalted reading and trashy TV (and sometimes the reverse) I’m still here. Since my surgery, every (Horrible Miserable) week I’ve spent waitng for a biopsy report ended in the blissful words we cancer survivors live for (often literally): benign, clean, negative. (Who ever thought negative could be such a beautiful word?)

The bad news is that even in an first-rate hospital, with a well-regarded surgeon, I suffered some egregious complications during my cancer surgery. Complications that have led to five more major operations. A year of johnnies, and IVs, and far too much jello--which I never liked, even when I was five. And in the end, or in the middle, where I am now, nothing worked. In the end, each surgery left me little more screwed-up than I was before.


The motto of my story? Stay out of hospitals... Unless they wrap up a sweet smelling baby and hand it to you when you leave...which used to be the reason I visited those institutions...Or you need them to save your life...which I did this time.

So okay, maybe there is no motto. Or maybe the motto is just BE GRATEFUL. I am. Every single day.

Now for the change of subject: sardines! Sardines in salad and sardines mixed with chili sauce. Sardines on rye with mustard or sardines mashed with avocado and garlic...I spent my life saying NO to the little bony omega 3 laden fish, only to find out that I love them.

What have you learned to love recently?
Posted by Patry Francis at 9:48 AM 94 comments: