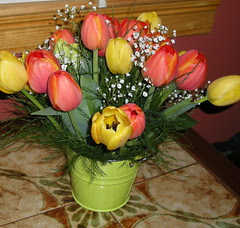 I started this post twelve days ago, but I was too tired to finish it. In fact, "too tired" has pretty much defined my life for the past two weeks. Too tired to fix my own tea, or to answer a comment on the blog, or to talk longer than three minutes on the phone. A flight of stairs was a mountain; and a shower a days work. I listened; I read; I enjoyed and appreciated, but I had nothing to give back. It was as if the effects of five major surgeries in three months descended all at once. My blood pressure plummeted. Blood tests and my ghostly pallor confirmed I was anemic and dehydrated.

The past two days have been a bit better. I walked a half block--today one house further than I did yesterday. I didn't realize how slow I was until I noticed that that my lame twelve-year old dog was yards ahead of me. But I'm not complaining. I was all dressed up in a pair of old gym pants, and I was outside.

When I passed the grumpy neighbor who never responds to my greetings, I felt a tinge of old resentment. No matter what, I wasn't saying hello to that guy again! I stared straight ahead, determined to ignore him. But he was working so close to the street, I couldn't quite pull it off. I called out a listless, head-down, "How you doin?" Then I kept going, prepared for another snub. But to my surprise, my taciturn neighbor looked up, put down his spade, and asked me where I'd been. Excuse me?

"I haven't seen you in months," he said. I didn't know he'd ever seen me AT ALL, but I didn't say so. Instead, I complimented him on his neat flower beds. He leaned on his fence and told me about the trouble he's been having with his underground sprinkler system. I'm not much interested in sprinkler systems, nor do I understand their workings, but it felt good to be talking to another human, and even better to realize my resentment had been unfounded. People are always more complex than we think. Damn. Shouldn't I know that by now?

Wilma, a student in the nurse practitioner program delivered them in their citron yellow bucket a few hours before I left the hospital. Wilma wasn't one of the wonderful nurses who'd been responsible for my direct care, but she'd come in to take my blood pressure a couple of times and I'd met her in the hallway during my daily walks. I liked her gentle manner, and the soft whispery voice that seemed to draw her listener closer.

During the three weeks I'd spent on her floor, Wilma and I had talked a few times. I learned she was the single mother of two adolescents, that she often worried about the neighborhood where her boys were growing up, and the many hours they spent alone while she worked and studied. These were concerns I understood well.

After I admired the gorgeous flowers Wilma had placed in my window, I wondered out loud who had sent them. "There doesn't seem to be a card..."

Wilma smiled shyly. "They're from me," she said. "I know you've been through a lot and I just wanted to give you a goodbye gift."

I was stunned. I knew how exhorbitant the prices in the gift shop were, and I also knew enough about Wilma's life to guess they weren't in her budget. Undoubtedly, I embarrassed her with my hugs, and my insistence that everyone on the floor come in to admire my tulips--and the extraordinary kindness they represented.

The flowers only lasted a few days, but Wilma's gift is still with me. So often we tell stories about other people's mistakes and failings. "I never would have done that..." we say, attempting to prove to our ego and our listeners that we are better, stronger, more compassionate. But in the end, those judgmental stories we love to tell (the kind I once told about my unfriendly neighbor!) only prove the opposite.

I might not ignore a neighbor on the street, but I wouldn't have done what Wilma did either--at least, not in the past. If the idea of buying flowers for a passing acquaintance arose, I would have quickly quashed it. I'd fall back on the beliefs that govern my life more than they should, beliefs like "You can't afford that!" or "Gift shop flowers are only for close friends and family." Well, who says?

I hope Wilma's radical generosity taught me another way. I hope it reminded me that life is too short NOT to give more than we think we have, too short to miss out on the joy of bringing tulips to strangers.
Posted by Patry Francis at 11:43 AM 85 comments: