THE ART OF SEDUCTION: A Short True Story 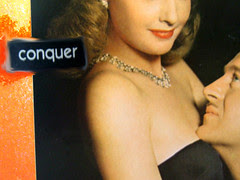 The first time I met Lina I was simultaneously pedalling uphill on the stationary bicycle and trying to distract myself by reading a William Trevor story in the New Yorker. Since I hate the recumbent bike, only a riveting story can make me forget the sweaty annoyances of my futile journey. For that reason I don't take unknown writers along on my bike trips. I take Trevor, Munro, Murakami, Jhumpa Lahiri, someone who won't let me down when I've still got 5 imaginary miles to go.

Beside me, an elderly woman gave new meaning to the term "stationary", as she flipped noisily through the pages of Glamour, grunting and snorting despite her obvious lack of movement. Occasionally, she spun the pedals around for effect, so no one would think she hadn't dressed up in gym clothes and slung a towel over her shoulders in order to carry on a loud argument with the editors of Glamour.

Finally, when she could take no more of Glamour's outrages, she shook the magazine in my face. "Can you believe it? Nine out of ten stories in here are about sex. I haven't had sex in twenty-six years. Do you think I want to read this crap?"

"Maybe I can get you another magazine?" I said sheepishly.

"Like what--AARP? Is that what you're thinking? Please. I may be retired, but I'm not dead."

I glanced in the magazine rack, looking for something that wouldn't offend her. There were various fitness magazines, but judging from her lack of movement on the bike, I doubted they would be of interest. So what--Sports Illustrated? Ladies Home Journal? I suspected she'd throw them at me.

"Actually, I'll take that New Yorker, if you don't mind. I lived in the city for forty glorious years."

While I returned to my torturous ride with nothing to distract me, but the nine articles about sex in the magazine she'd given me in exchange, she flipped the pages of the New Yorker, verbally leafing through her memories of the city. At first, I was annoyed that she'd not only interrupted me; she'd somehow conned my magazine out of me. But soon I was so amused by her anecdotes that I almost forgot I was climbing the last hill on the dreaded bike.

Then, apruptly, she clambered awkwardly off the bike and returned the magazine. "I'm not really in the mood for this today," she sighed. "Maybe I'll go swimming instead." She was probably in her late seventies, but there was something about the tilt of her head, her crimson lipstick, and the thick headband she wore that reminded me of a glamour girl from an old fifties movie.

Her face erupted in a smile. "Has anyone ever told you you look like that actress who used to be married to Bruce Willis?"

"Demi Moore? Well, uh--" I looked around to see if anyone was behind me. "Not lately."

"Yes, that's the one. Can't act her way out of a paper bag, and she's quite a little slut, too--running off with that young boy--but she's still gorgeous."

I rearranged a sweaty tendril of hair. "Really, you think I--" I began.

But Lina was already calling to her friends in the gym for verifciation. "Tell me the truth. Doesn't she look exactly like Demi Moore. Though of course, she's nothing like her. This woman has class."

"Everyone looks like a movie star to you, Lina. I think you watch TV too much," one young man said, reaching for a barbell. But it was clear that he, too, was charmed by the woman in the head band.

"You're just jealous because I told your friend he looked like Johnny Depp."

She turned to me, her mascared eyes wide. "Wait till you meet his friend. Have you ever heard the word 'swoon?' Well, that's what you're going to do. Right here in this gym."

We all laughed. All Lina's movie star friends. And me, too, the new Demi Moore.

Before she left, she shook my hand. "Delighted to meet you," she said elegantly, as if she weren't wearing a bathrobe, and I wasn't shining with sweat. "Please tell me your name, but don't be offended if I forget it the next time I see you."

Which she did. But she didn't forget that I looked like that gorgeous little "slut who used to be married to Bruce Willis," or that I liked William Trevor, and wanted to be a writer myself.

How this stranger had gotten that little secret out of me, I'm not sure. Call it the art of seduction, an art that is clearly not limited to the young, or the bedroom, or to magazines in which nine out of ten articles are about sex.


Nano update: Haven't written a word in three days. Hopelessly behind, but still vowing a come from behind victory!
Posted by Patry Francis at 6:02 PM

I love this one! Demi! I bet you did too.

I enjoyed reading this post. Lena sounds like a real character. Enjoy her company every chance you get. Just passing through on the BE Rocket. I'll be sure to click on your byline again

An enjoyable slice of life.

Just read the chapter you have on... that other site. Sounds interesting. Good luck with it.

I've really got to get out more. I love your anecdotes!

"Nano update: Haven't written a word in three days. Hopelessly behind, but still vowing a come from behind victory!"

(sigh) I'm in the same boat, Patry. But hope is a beautiful boat.

What a great story! I love characters like that. They're truly bigger than life and have so much presence.
Well done, Demi!

And I look like Bruce Willis . . . . after he went ten rounds with Lennox Lewis.
I don't know about you but I always end up chatting to someone who seems to be a total fruitcake or sadly two slices short of the full loaf.
Bloody good writing though.

Thanks so much for all the comments. As always, they are greatly appreciated.

Now I'm wondering if anyone knows the identity of the seductive woman in the pic? I know the man is David Niven, but am not sure about the woman.

And oh yes, Scott: I especially appreciate that you took the time to read the excerpt from my novel.

Thanks for the feedback.

And who says you can't meet quality women at a health club... ;-)

Great narration! I could visualise the whole scene.

I liked the way you depicted the steady change in your opinion about the lady as the acquintance increased. Very fitting story for the title - though I admit I was expecting something more juicy! ;-)

BTW, the 'seductive woman' in the pic is Barbara Stanwyck.

Santanu: I wish I had a prize to give you for identifying Barbara Stanwyk. Very impressive, especially without the eyes.

The phrase "recumbent bike" makes it sound like a genuine instrument of torture! Lovely.

Patry, that's a great story, well told. I liked the woman. The actress in the picture with David Niven is, I'm pretty sure, Barbara Stanwyck.
I'm running slow on the NaNo marathon too, what with being a week late to start, but I've just given myself a kick by posting *all* of what I've written so far. If one's going to be exposed at the end, might as well be exposed from the beginning.

Heh. You find the best moments in the sea of life. You're either in the right place at the right time, or you attract these gems to you because you write about them. Anyway, great story!

In my life, there seems to be an endless supply of fascinating characters, carrying a trove of fascinating stories on their back just waiting for someplace to drop them. Then I come along--a famished writer who lives on stories! What can I do pick them up and bring them home?

sdRay said...
This comment has been removed by a blog administrator.
5:02 PM

Anonymous said...
This comment has been removed by a blog administrator.
11:21 AM

Wonderful and informative web site. I used information from that site its great. » »

Keep up the good work here