5 THINGS YOU CAN'T AFFORD ON A WAITRESS BUDGET 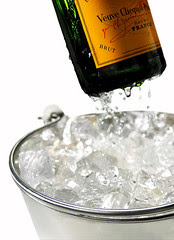 1. Expensive perfume. Sure, I might occasionally steal a furtive spritz when passing the cosmetic counter, but more often than not, it smells like bug spray or old ladies in church to me, and I end up heading to the nearest Ladies' to wash it off. Though I've often been seduced by the names of fragrances like "Happy" and "Glow", the clean smell of goats milk soap and baby lotion suits me fine.

2. Matching china. I've tried to accumulate a set; I really have. Not quality stuff, but just an every day set of twelve matching plates and bowls that won't embarrass me with their cracks and chips in front of guests. But inevitably, a couple of plates always get quickly broken and I'm forced to mix in a few mismatching pieces from the basement. At this point, I've done this so frequently that there aren't more than two or three items on the shelves with the same pattern. Oh well, now they call it shabby chic, right?

3. Travel--and this is one I can't dismiss as something I didn't want anyway. Though I don't like touristy vacations, I'm mad with lust for new places, rich cultures, the music of other languages. I want to set myself up with my notebook and beverage in a nice cafe and pretend I live there. But instead, I travel on a daily basis in the blogosphere, visiting countries and sharing a greater intimacy than I ever might have ever had walking through a foreign city in dark glasses.


4. The casual ability to dismiss or ignore any other human being for the uniform they wear or the job they do. Can't seem to miss the fatigue of the cashier at the grocery store at the end of her shift, or the brooding bored gaze of the guy pumping gas either. For far too long and in far too many ways, they have been me and they always will be.

5. Good champagne. Until yesterday, I never sipped anything from a fluted glass that cost more than ten bucks--which may explain why I never liked champagne. But last night, for the very first time ever, we splurged on good champagne. At first sip, I was a little disappointed. I thought maybe it was as delusive as those expensive perfumes that smell like Raid, or that maybe it was too late for me to develop a taste for it. But before a third of the glass was empty, I was crooning, Mmmm, this stuff is goood. Trouble is now that I've tried expensive champagne, I'm wondering what else I've missed on my waitress budget.
Posted by Patry Francis at 2:35 PM

Can't say that having the luxury of No. 4 would mean much to me anyways. I try not to look down on anyone. Plus I give reasonable tips that the waitress can feel good about.

I'm with you on these points as a struggling artist!

One suggestion on dishes - you can sometimes find replacements in secondhand consignment shops. The dishes we got as wedding gifts were being increased at every anniversary and birthday to get a dozen place settings, but without my knowledge the company stopped making them! Some years later I found them at such a shop, but they cost more than the new ones.

Anyway, enjoy the finer things in life once in awhile - you deserve it!

I think that the value of owning matching china is overrated. Still, as Marja-Leena said, you could cobble together a matching set form consignment shops, places that specialize in replacements -- and there is always eBay.

I am with you on travel and good champagne!

I have a rule about guests, which is not to have them over if they are picky about such trivialities as matching dinnerware.

Matching dinnerware, like matching curtains and color-coordinated clothing is boring and predictable. Sticklers for such nonsense are usually both.

Nice oversize white plates are easy to find in thrift shops. Serve a memorable dish on them and they will seem like they're from Shangri-La.

Laylah Queen of the Night said...

The fact that you can't miss the folks in the uniforms and cashiers says something about your humility and humanity.

joel: you're right; looking down on anyone is a luxury that none of us can afford. But as a person who frequently don's a uniform, I can tell you that plenty of people do. Not that it hurts my feelings. I always feel that blind people need to be treated with special understanding and care.

marja-leena: the main thing an artist or writer needs, which I'm sure you know, is simply time and space and materials to do their work. I appreciate your suggestions on the china though.

maria: You are probably right. I've undobutedly glamourized the matching china thing simply because I didn't have it. And your comment made me realize something: the reason I don't have it is because I don't want it enough. If I did, I would be trolling the consignment shops, etc. in search of one.

finnegan: You've added another key insight. It's the food on the plates and the company around the table that makes a meal memorable--not the chips or lack thereof in the china.

laylah: excellent suggestion, and there just may be some of that in my future. Thanks for stopping by.

Patry Francis said...
This comment has been removed by a blog administrator.
9:17 PM

Patry Francis said...
This comment has been removed by a blog administrator.
9:17 PM

I always feel that blind people need to be treated with special understanding and care.

That's the kind of statement I love about you!

I once won a little extra money. I spent it all on champagne and smoked oysters. Ooh la!

Those of us in a position to not afford everything must choose our splurges well — and really, that's not a bad thing itself. Because splurges are that much more appreciated. And because most of the best stuff in life is not in the things themselves but in what happens around them, through them, despite them.

Maria and Finnegan are right, and Laylah may just be onto something for you!!

Patry: You're so right about people who look down on those who wear a uniform. I've dined with some of them....

I've worn uniform and worked as a waitress. Always try to communicate with the checkout till people and say thank you. And I always get a smile in return. I was shocked at the way people behaved when I was in uniform. I often felt invisible. And waitressing, oh my feet, I've been good to them ever since, good comfortable shoes, and peppermint lotion.

And it's true, I get quite angry when fellow diners behave rudely toward restaurant staff.

What are you looking for today?

What are you looking for today?

Hey, while searching for widgets for my blog, I stumbled upon www.widgetmate.com and wow! I found what I wanted. A cool news widget. My blog is now showing latest news with title, description and images. Took just few minutes to add. Awesome!

If you have to travel in style, sure you need a lot of money, but you can do it on the cheap if you copy all those Australian students. I'm always meeting Aussies who are backpacking all around Europe year after year. They take jobs where they can get them to finance their trips, mostly. So they work call centers, or take some work picking grapes or whatever the local crop is...

I'd appreciate! I've been planning to get my nose straightened and this blog seems to be very informative for people like me

that look out for info on rhinoplasty