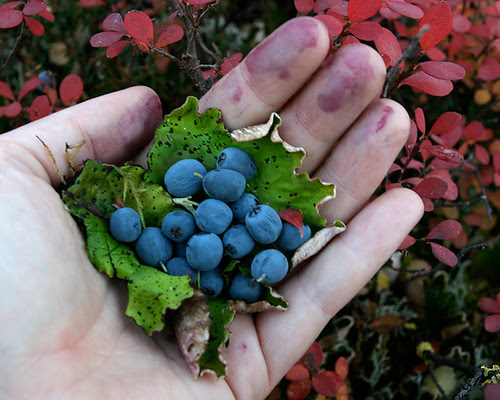 Back in August, my friend Susan Messer and I concocted a scheme to please our capricious muses. We would bake them pies! But not just any old pie; this was a very specific blueberry pie with a unique literary history and mythical powers. (To learn more, you'll have to return to the August archives and read up.) But really, homework isn't necessary.

This is the story in a nutshell: We planned months ahead, we used only the freshest and finest blueberries; we coordinated our calendars and then we made pies. The only difference was that Susan used a labor intensive pate brisee crust--and I, true to form, took the lazy way out with a frozen pie shell.

Well, now it's October, and Susan's muse has responded in a big way. First, she was notified that her story "September Song," which was chosen as a finalist for Glimmer Train's Very Short Fiction Competition will appear in the Spring, 2006 issue. I've read the story and it's well worth the effort to seek it out.

Then just days ago, she learned that she'd won first place in another presigious competition. Moment, founded by Elie Wiesel and currently the largest independent Jewish magazine in North America will publish her winning story in its November issue.

For Susan, this couldn't have come at a better time. While the gods of literary prizes have been shining their light on her abundant talent, her well fed muse has also been doing her part. A novel, on which her winning story is based, is humming toward completion.

Hmmm...maybe next year I better use the pate brise.

Posted by Patry Francis at 7:08 PM

You'll have to take a picture of the pie when you finally get to it and the recipe. (I'd rather get a piece, but geography and all that... :)

Melly: Next year when we bake our pies for the muses, you'll have to join us!

Way to go Susan! and patry call me when you make the next pie.

Thanks so much for this. You're a real friend. Just remembered, though . . . aside from the crust difference, I think you put the whipped cream on the top, while I put it on the bottom. Anyway, it's funny to be thinking of blueberry pie today: (1) it's cold, and the leaves are turning orange and (2) it's Yom Kippur, and I'm fasting. But I'm also taking this as a writing day, so we'll see what percolates.

r: I'll post the recipe again next year when it's time for the literary bakeoff.

Susan: I love a chance to post good news. Since I haven't had any lately, it was a pleasure to share yours.

As for the pie, next time the cream's definitely going on the bottom where it belongs!

Those looked so good, I went to eat the ones in the refrigerator.

beautiful picture and a fun post - I sent Jam to my muses, does that count... its apricot pineapple and I still have a jar ( home made by me) if you want to BE a muse.... or just have some yummy toast
Bless you

Joel: Glad you were inspired to eat blueberries. YOur body, if not your muse, will love you for it.

It really is a gorgeous photograph, isn't it?

David:Mmm...Not sure how good a muse I'd make, but apricot pineapple jam sounds wonderful.

Susan:
Finally got around to reading your story "September Song". You write with great emotions, from your heart and I believe that is where all great writers have to dwell, explore, and pour forth if they want to draw out the deeper meanings in life. You succeeded immensely in this short piece of fiction.Look forward to some day meeting you and your husband with my wife Patry. Congrats.
Ted

Where did you find it? Interesting read Buy battery chargers canon digital cameras