THE PIPING PLOVERS MAKE ART...AND THEN WE DO 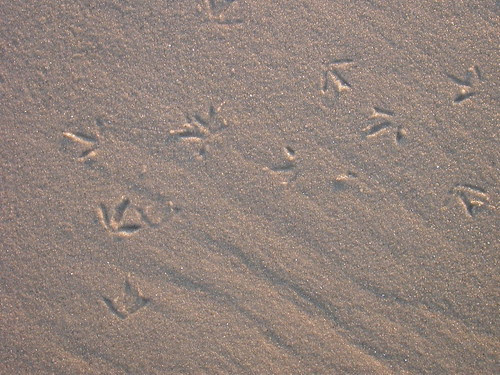 Though I didn't get a chance to post yesterday, I did make art. I also saw art. Everywhere. In the leaves that remain on the trees, browning yes, but still containing the last mysterious traces of summer's light, in the rust patterns on the my son's first car, in the cottony whiteness of my mother's hair. 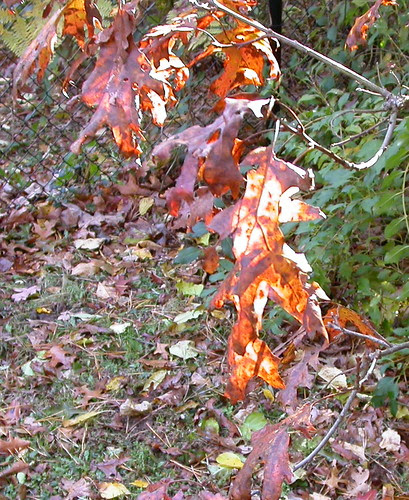 Yesterday we trooped to the beach, kids, dogs, all of us, and found we had entered one of life's perfect and perfectly enigmatic hours. The tide was out; the light was pink and gold; and the piping plovers (one of my personal obsessions) were doing their delicate dance up and down the beach.

The kids and I played detective, following their arrow-like prints until they converged in an almost indecipherable mass. Usually there was a tell-tale clamshell or a sucked out crab leg to explain why the plovers had themselves a little party in that particular spot.


We also noticed the way the tides had etched treelike images on the sand as they tugged the seaweed onto the shore. Art was everywhere!

The dogs chased each other to the sandbars and then took a swim in the icy water. When they emerged, hey seemed to shake even more triumphantly than usual--as if they knew this might be their last swim of the year, and they wanted to enjoy it to the hilt.

Someday I will go to the beach without feeling the need to bring back a treasure, but yesterday was not that day.

*a perfectly flat rock that was shaped like an irregular heart

*sea roses that were still in bloom which we admired, but did not take home

*pine branches both living and dead

*an amazing shell that bore an exotic brown and white design.

On the ride back home, the kids pulled their treasures from their pockets and held them up to the changing light. I couldn't wait to look at mine either--though I waited till we hit a stop light.

Then we went home and made art! The kids set up the art space and made us a banner. 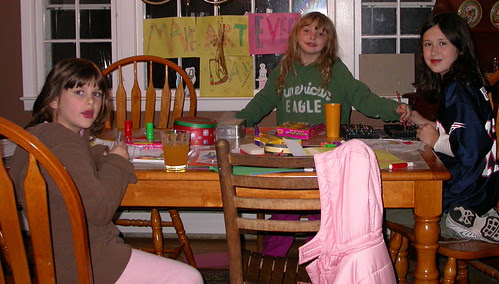 Then the women joined in. Though the men were preoccupied by football, they proved to be a most appreciative audience when we held our "exhibit" later on. 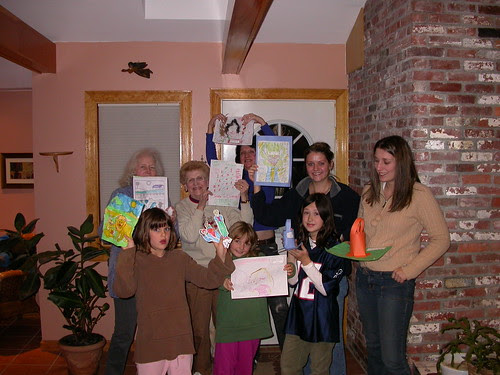 Posted by Patry Francis at 6:27 PM

What a happy and art-full day for you and all your family! Great photos!

What a happy and art-full day for you and all your family! Great photos!

That top photo is arresting. What a wonderful post. It sounds like you had a warm and happy day appreciating all sorts of things together!

What fun! The first one reminds me of Native American sand art!

This was delightful and I agree with you about art being everywhere...it is and it's all beautiful.

hugs to you Patry
ooo
darlene

Sounds like a most wonderful day. I live on the prairie and have never heard tell of sea roses. I am left wondering what they are.

marja-leena: Thank you. Twas indeed a lovely one.

herhimnbryn: And thank you for coming...

mb: I love the glitter in the sand, and as I say, I am enamored of everything about the Piping Plover.

colleen: maybe the Native Americans were imitating the plovers?

Darlene: I think that's the best thing about trying to create it. However humble one's efforts might be, they expand your vision. xo to you, too!

kat: Look what you've done! YOu've inspired my whole family! We all thank you.

coll: Now you've given me a mission. I have to photograh a sea rose so you can see it. They are lovely--and the scent when mixed with sea and salt air, is incredible.

This sounds like an absolutely perfect day to me! How fun that everyone joined in the creativity.

I haven't heard of a sea rose, either - maybe we don't have them on the west coast - or call them something else?
Animal, vegetable or mineral?

tinker: It was especially fun for the kids, because the adults were playing. Or no, on second thought, maybe it was the other way around. Instead of sitting around, bemoaning the state of things we can't do much about, the adults got out the paints and crayons and scissors and made ourselves a brand new world. If only for a day.

Sounds like an amazing day!
I love the cover of your novel, congratulations! And thanks for dropping by at chestofdrawers.

Wow, you have written a real book! Congratulations and I love the cover. Thanks for dropping by at chestofdrawers!

Now THAT'S the way to spend a day!

A couple of summers ago I volunteered as a piping plover spotter at Waquoit Bay, specificall on Washburn Island. I really enjoyed boating over there, and walking the beach with my binoculars. Saw only a few of the little darlings, they are rare there, but saw many other wonderful birds. Also collected some glass.

Thanks for sharing the photos. I'm going to post a leaf in honor of you and your post.

And you say you don't love the beach, Patry! Fun fun!

One final (promise!) note on Sun: I posted a longer version of my review on BlogCritics --http://blogcritics.org/archives/2006/11/06/090944.php is the official link to the review -- and included a link to Simply Wait toward the end, with a note about the Third Day Book Club.

Thanks for visiting my blog. It sounds as if you had a fun, artsy kind of day....the best kind!

chest of drawers: Yes, a real book! Believe me, no one is more amazed than I am. Thanks for the visit, and the lovely words. I very much enjoyed poking around in your chest of drawers.

r: I wish you were here, too. Luke would have had fun.

marilyn: It was wonderful, but I enjoy being back to work on a bright new Monday morning.

gerry: Now I have to learn more about Washburn Island. The Plovers are quite abundant on Long Beach, where we usually go. They are such amazing little birds, as delicate as a whisper, but quite aggressive when it comes to shellfish...now I have to go out and check out "my" leaf.

k: I do love the fall/winter beach when exploring replaces sunbathing as the predominant activity. Also, after Labor Day, the dogs who are banished in the summer months are allowed to return; they get so excited if anyone accidentally throws the word "beach" into ordinary conversation that there's no way to avoid getting out the leashes.

So happy you got the review up at Blog Critics! What a great idea!

janet: Thank you and welcome! It's been so much fun meeting all my fellow "artists" this month. (The quotation marks apply to me, not to the rest of you, who represent a truly astonishing potpourri of talent.)

Patry, somehow I have lost your email info. I need to email you something important re: your novel. Can you email me:

It's nice to know that perfect days can still be found, along with heart-shaped rocks and black seaweed. The simplest treasures and pleasures of a day. Lovely.

You know, some smart people consider living an art.

That must have been such a fun day! You all look happy. I really enjoyed the photos, too.

See? Art is contagious--just look at you, sharing it all over the place. What fun...I collect heart-shaped rocks, from where I'm sitting I see all eighteen of them just resting patiently for me to pay attention...oh, biitersweet love!

In case you wondered, I do know how to spell: "BITTERSWEET". Sorry about that...

What a fabulous day for all! It sounds glorious, from start to finish. Beautiful art, both in nature and in your creations.

Please send me e-mail about the book club - am I supposed to post announcement about the Dec. book now? I'm not sure what you need me to do. I'm going to London Wed-Thurs, back in Paris Friday.

My daughter asked me today when we could go the beach. I had to tell her not for a very long time. We're land-locked. But we can make art, and we did. I love that your whole family is getting into this. There's no greater gift.

RA: The simple treasures...I find them every day at your place. Happy day before voting day, dear.

sara: I would have to agree with those pepole.

kathryn: You and a couple of others who urged me to keep trying were definitely part of our happy day. Thank you.

left-handed: OH, I'd love to see a photo of your "bittersweet love" collection some day. In fact, I think you just gave me an idea for tonight's big art project! Just when I think I've run out...

Paris: I'll email you. Meanwhile enjoy your trip to London!

anne: Maybe you and your daughter can paint the sea. Creating it is certainly half the fun.

kenju: Another artist stops by for tea! Welcome!!

I love all the photos. And the obvious happiness you all had.