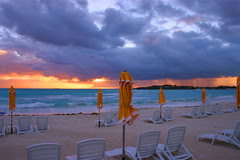 sunrise
Originally uploaded by killthebird.
I had various titles in mind for this post, but have decided to let the title of the photograph stand. sunrise, small s.

As for the category it belongs in, I'll let you decide. My subject, besides sunrise, small s, is how you feel when someone you knew quite well, but didn't really like dies, and why death--as mundane and common as the bread we eat or the grass on which we walk still has the power to shock us.

C. was a former co-worker, with whom I struggled to get along, but frequently failed. Unkind words were said, grudges held, hours spent rehearsing comebacks to her next rebuke. Once or twice I scored petty victories, which I retold eagerly to friends and allies on the job.

But there were pleasant times, too. I sat outside and drank coffee with her on breaks. The inevitable plume of smoke encircling her head, she reminisced about the many boyfriends she'd had and the way heads had once turned whenever she walked into a room. We also shared a mutual love of children and animals. Though C. was not a mother herself, she had a relationship with the son of a former boyfriend that exceeded many mother-child bonds in affection and generosity. A couple of times I attended the annual themed birthday party she threw herself, laughing as she said "no one else was going to do it." She always served Mexican food, her favorite, and posed with me for pictures. Her friend who was not quite a friend.

Once she told me her favorite month was July; and she usually took the whole month off to bask in her love of beach and sun. It seemed meaningful that I would hear of her death on a bright July day.

I hadn't seen her in a couple of years, not since I left the job. Last summer when another former co-worker called and told me C. had been diagnosed with lung cancer, my "good intention" reflex was activated along with my sorrow.

I carefully chose a card--one that was neither too falsely cheerful, nor too gloomy--and stared at the blankness inside for fifteen minutes. I could not think of a word to write. I would send the card tomorrow, I said, putting it in the drawer where it still sits. Every time I drove past her street, I thought of dropping by--maybe picking up some Mexican take-out for us to share, bringing a potted plant. But I didn't.

Yes, I knew she was ill. I knew she was terminal, but I was still surprised by the phone call this afternoon. In the end, our common humanity transcended all our petty differences. Why didn't I know that before?

So now I will open my desk drawer and throw away the card I never sent. Then I will go out and buy another one to send to her brothers. On Monday, I will pay the visit I never had the time or generosity of spirit for--to the funeral home.

If I'm lucky, I will wake up tomorrow to another July morning and see the sunrise, small s; and probably sometime during the day, yet another opportunity for kindness will pass me by.
Posted by Patry Francis at 1:40 PM

It gets you every time, doesn't it? Death skulking around the corner.

Regarding the tag. Remind me of the questions.

I like your picture better - more fiery than yellow - i searched under yellow. And what's a tag?
can i play?

what a beautiful sunrise!

death is cruel, the finality, the never-seeing-again. its like somebody closed a book with a thud and said now, that's that.

sometimes i wonder how i will feel about people who i don't like or who don't like me when i'm dying. i guess all that won't matter then.

what can you say to a dying person?

This is a deeply affecting post. Sorry about your friend.

I was startled about the subject, as I 'd only casually mosied on in through a link from Virgo's site.

My recent post deals with the "c" word, but in an altogether manner.

I like your writing, and will be back for more in the future.

roger: I like your image of death skulking. I think I dreamed about it last night.

gulnaz: your question relieved my conscience a bit. What do you say to a dying person? How much could I have helped in the end?

finnegan! Thanks for the (intriguing comment and visit. Of course, I had to go immediately to your blog which turned out to be a wonderful experience.

oops, i meant to include different in my comment, but the "altogether manner" made me dog-tilt my head.

i'd like to make a link banner to your site for my sidebar. is that alright with you?

Sad news indeed. Oddly, I just watched Stanley Kubrick' Barry Lyndon and was struck by the ending. After the closing scene a small caption appears on the screen reminding the viewers that this all happened a long time ago and though some characters were wealthy, others poor, some good, some evil they are all equal now. At first I snickered... then I fell silent and blankly watched the credits realizing one day, 100 years from now, the actors, the walk-ons and me will also be equal.

Matt, the great Stanley Kubrick is equal with his comment. Sobering thought indeed.

Matt: Barry Lyndon had a great impact on me when I first saw it, and your words inspire me to want to see it again.

Finnegan: My mind read the word "different" even though it wasn't there. Funny how that works. And yes! I would be most honored to be linked from your site.

Death is always a nasty surprise, no matter who has died. I'm sure your kindness to the family will have been welcome.