UP FROM THE BLUE DAY 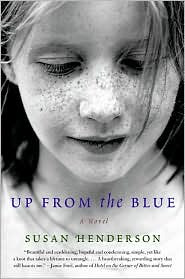 
Imagine you had the power to name a holiday, one that celebrated rising, tenacity, the resilience and generosity of the human spirit.

How about Up From the Blue Day? On that day, just for one twenty-four hour period, everyone would rise out of whatever blue mood, or blue music or blue funk that might engulf them and celebrate. The next day, if you want to go back to being miserable, or if you need to--well, I understand. But just for one day, the blues of all kinds would be banished.

People would sing. And shimmy. Maybe drink blue martinis in cool bars in New York. Or wine in blue glasses on their decks on Cape Cod. Or wherever they might be. On Up from the Blue Day, no one would listen to the scary old news, or give in to envy or utter a single mean word about anyone.

I know it sounds tough, but come on. It's a holiday! Get into the spirit.

As it turns out, three lovely friends beat me to it. Jessica Keener, Tish Cohen, and Robin Slick already named this day in honor of Susan Henderson's debut novel of the same title.


I haven't had the pleasure of reading it yet, but I've seen the reviews, and people I trust have been raving about UP FROM THE BLUE since the early drafts.

But what really makes me eager to read this novel is my belief that wise, generous people produce wise generous work. It just a law of nature. And I've read enough of Susan's short fiction, to know she proves the law.

If you've been here before, you might remember a couple of years when I blogged about little besides IV poles, and johnnies, and endless waits for lab results. Two ugly words that seemed flash constantly in red neon before my eyes, no matter how hard I tried to escape them: aggressive cancer.

It was the most difficult time in my life, but right there in the middle of it, someone created a holiday just for me. It was a day when I wept almost all day--not from fear, not from grief, not even from happiness, but from sheer awe at the goodness of people. The kindness of my fellow writers and bloggers. A lot of amazing friends were involved and I will always be grateful to each and every one of them, but Sue was the driving force behind The Liar's Diary blog day.

So you know I don't often sell stuff here. I don't even push my own work (much to the chagrin of publishers and agent.) But if you like good fiction, today would be a great day to buy Up From the Blue.

And if not, then go out and something for someone else. It's what Susan would want you to do.

That's just the kind of person she is.

P.S. Since the procrastinator is getting this up kind of late in the day, we just might have to extend the holiday into tomorrow.
Posted by Patry Francis at 1:57 PM

I went out to my favourite indie bookstore today to look for Up From the Blue, only to find that they were having a 50% off sale because they were going out of business (after 35 years). I bought up a bunch of books and had to choose that way of celebrating Up from the Blue Day. It's a great idea.

What a life-giving idea! It is so special and I'm so happy this dear and as you say, wise, person got the idea. The book is on my list and the idea is in my heart. Thank you for letting us know. Up From the Blue!!

Lorna: So sorry to hear about your favorite indie. There is no replacing these stores, the personal service they give, or the passion of the booksellers. While buying books is a great way to celebrate Up From the Blue--especially if it includes Sue's novel-- this is clearly bittersweet.

Ancient Reader: Reading over my post, I realize it's a little misleading. The one day reprieve from the blues was not part of the official celebration. It's my quirky response to the title, and to Sue's exceptionally bright spirit and giving nature. (And I have to say it's been very freeing. Just tonight, a bit of meanness knocked on my door, and I was about to throw it open when I realized I didn't have to. Not today. And not tomorrow either.

In any case, I hope you'll come back and share your thoughts about the book after you read it. You always force me to think a little deeper.

I just ordered it because it looks like a good book. But even more because I remember the Liar's Diary day and I'm a great believer in karma.

And Patry, you don't have to push your own work. Your writing does that. I can't imagine someone reading your blog and not looking for more. I'm glad to see a couple of new posts!

Thanks so much, Mary. I've thought about you many times during my hiatus from the blog. Speaking of karma, your positive spirit, generosity and support for other writers is surely generating its own.

Patry! I've missed you! How can people slip through our fingers this way? It's all my fault - but I'm going to fix it, and also check out the book Up From the Blue. ;o) Thanks for the recommendation!

Just ordered it - it looks fabulous! Can't wait to meet the characters. ;o)

Aaron: I was thinking the same thing when I got your recent message: I've missed you, too! Hope all is well with you and your family. Thanks for buying Sue's novel. I started it last night, and I can say for certain: You will love it!

Patry Francis said...
This comment has been removed by the author.
6:59 PM

wow, late for the party again. i will celebrate in NY this wkend with a blue martini ?? and go a hunting for the book.

R: The perfect place to buy the book, for sure!

I'm always looking for something new to read. Thank you for the recommendation!

Roberta: Now that I've read the book I can say with certainty that you'll love it!

I have missed you dear lady! Always happy to see you posting. I will check this book out!
xoxo

Annie! Thanks so much for coming back. xo

Speaking of blue days, I've started a new blog, and it no longer is called "twoblueday." I now just use my name as the name of my Wordpress blog: gerryrosser.

If you reconstitute your blogroll, I'd be honored to be on it.

Unknown said...
This comment has been removed by a blog administrator.
10:30 PM

maintenanceg said...
This comment has been removed by a blog administrator.
2:47 AM

صيانة said...
This comment has been removed by a blog administrator.
4:23 AM

Unknown said...
This comment has been removed by a blog administrator.
6:08 AM