ANOTHER KIND OF CHRISTMAS 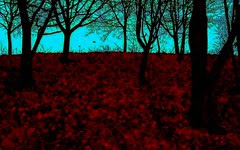 Last year a family member decided to do Christmas in a different way. Instead of gathering with family for a lavish feast and the traditional exchange of gifts, she delivered her packages early. Then on Christmas day, she and her husband served a meal to homeless veterans in her community. She says it was the best Christmas she ever had.

She plans to do it again. But this year, she took it a step further. She announced that she would neither give nor accept gifts for Christmas. Anyone inclined to wrap a present with her name on it could deliver it to the Salvation Army for someone who truly needed it. I wish you could have seen her smile when she said it. There was no smugness there, not an ounce of self-righteousness, just that emotion that is supposed to define the season: Joy.

Not only was her family undaunted by her decision, they, too, were joyful. If she didn't have to "Do Christmas" with all that implied, then maybe they didn't either. Halleluljah!

What's more, she intended to spend the season of Advent as a time for slowing down, not gearing up in frantic and frequently purposeless activity.

She would take long walks with her spouse. She would pray and meditate. She would think about what we long for when we sing "O Come Emmanuel." She would spend time actively longing. And not for anything that is sold in the mall.


Oh, of course, the family would get together--though it didn't have to be on the 25th, since she had marked that day for service. But they could throw all the enticing flyers from the mall away. This Christmas the family had given each other the gift of freedom.

But what about the children? you may ask. And yes, children want and deserve the magic of the holidays. A glittering tree in the window, a prettily wrapped box beneath it to shake and jiggle in anticipation. They need to go to bed on the 24th looking out at the familiar stars, and wondering what may appear in the sky to change their lives before morning.

But even children are waking up nauseated with the gooey excesses of commercial Christmas. Many receive so many junky and unimaginative toys (as seen on TV!) that they tire of the task of opening them before they're finished.

So yes to magic. But no to commercial importunings.Along with that coveted doll or bike or video game, what's wrong with gifting a child with the joy of service, the chance to light a candle and ponder the meaning of life in its flickery flame?

Sure, decorate your house as creatively or as gaudily as you want. But remember, you don't have to. Max out your credit cards, and attend as many holiday bashes as you can fit into your calendar. Send greeting cards to everyone you've ever known. Get into an uproar about which stores insist their clerks say "Merry Christmas," and which don't. If you want to. But just remember, you don't have to do any of it. Any time you want, you can just stop.

The only real requirements of the season are:

1. Take some time to pay attention.

And 2. Look on everyone you meet, for a whole month if you can manage it, or even for just one day, with sincere goodwill.

Responses to the latest blog survey--and a a new question tomorrow!

Last chance for anyone still hoping to be heard!

Posted by Patry Francis at 2:34 PM

Is the "she" you? I wondered at this: She would think about what we long for when we sing "O Come Emmanuel."

I believe in the importance and value of hand-made gifts, especially with children. For me, it's as if the making invests the gift with the love and thoughts of the person the giver carries. It's a beautiful thing. So every year, my child and I make gifts, and they are received with unquestionable appreciation.

Hmm, maybe you should come read mine from yesterday.

moose: homemade gifts are the best! I was thinking of someone else when I wrote the line about longing, but it certainly applies to me as well.

j: thank you. I'm off to email you right now!

vickie: Thanks so much!

I've noticed the first faltering signs of a new attitude to Christmas over here too. Maybe we've finally all started to get fed up with the nonsense?

Finally got around to linking you, Patry. A little bit of tasteful American is always good for us rowdy britbloggers.

thanks Patry! i enjoyed this post, due in large part to the fact that i have had it with the commercialization of Christmas.

what a wonderful act of selflessness in a season that's been overrun with greed.

Thank you for this reminder to shift the outlook this time of year. My yoga teacher was talking about looking at this as a time to go inward. Indeed, a much healthier idea for us all.

and the people say, "amen."

You realize, I guess, that giving to the needy isn't a new Christmas tradition, it's a very old tradition, eclipsed in the early 19th century by the bourgeois re-definition of the holiday as a celebration of what we now call family values. At one time, "family" meant something much broader in Christendom - and Easter was the central holiday, not Christmas.

Sorry i haven't responded to either of your blog surveys. I just got caught up on my reading here last night, reading some twenty posts in one sitting - a very enjoyable experience,I might add. What a terrific writer you are, Patry! I'm so happy for your success.

Mark: "Fed up with the nonsense" You always say things so succintly. Meanwhile, thanks for the link. Didn't know I was a "tasteful American" though. Maybe I better spark things up a bit around here!

bigshoulders: thanks for your visit and your comment. I will be checking out your blog.


Matt: I can almost hear that Amen! Thank you.

Dave: Hopefully, we are returning to that broader sense of family. Thank you so much for your extremely kind comment about my writing. Coming from you, it means a lot.

Patry - I meant 'tasteful' as opposed to Donald Rumsfeld, for example. Feel free to be as tasteless as you like in private :)

Homeless Veterans - does that sound like an oxymoron only to me???

Magic isn't in the presents. We get presents on our b-days (and even then it's the attention we like). Magic is in the spirit, in the get together, in doing family things. That's the real magic.

This is so lovely, and a very important reminder of what the holidays are really about. It is so easy to lose sight of that. Thank you.

We always handmake chocolates for Christmas, given out in little boxes. We like taking them around and hand-delivering them in the weeks before Christmas (or to parties and things).

I found "Beginning to Pray" to be an amazing book as well.

Still, I am waiting to spend Christmas in Cancun....Just once.

Patry,
I cannot tell you how fortunate I consider myself to be after reading this post. For the last few years, Christmas has just about driven me absolutely nuts and flat broke with trying to keep up with gifts for family, friends, and co-workers. It's become too complicated and too expensive to continue participating on the level I have been. This year I find myself pulling back and concentrating on the actual message of Christmas, and instead of many meaningless gifts for all, I'm staying focused on my immediate family and friends. Getting back to simple and genuine makes sense to me.
Scot

Melly: well said, and yes, "homeless veterans" SHOULD be an oxymoron.

swirly: thanks for your visit and your comment. I love your blog and your artwork!

Matthew Francis: Handmade chocolates sound wonderful! I was out looking for that biography of Bloom tonight, but no luck. Will have to order it.

Scot: Somehow I'm not surprised to find you in agreement with me on this.

Lovely post. That may be the answer for what do you want for Christmas.

Do You want to find out more about Motivation and leadership...then go to http://possibility123.com/motivation-and-leadership.html..