AN INTERVIEW WITH CARRIE KABAK! Carrie Kabak is a former children's book illustrator. Born and raised in the United Kingdom, she lived in Bolton, Lancashire, then in South Wales, the West Midlands, Worcestershire, Herefordshire and Shropshire, and spent a lot of time in France, Switzerland and Ireland. She now lives in Kansas City, Missouri. Carrie and her husband share five sons, two labradors and a couple of cats. Her first novel, Cover the Butter, has been garnering great reviews, and was a Book Sense Pick for the month of June.


P.F. This novel seems to take on both sides of domesticity--the charm and comfort it provides, and the trap it sometimes sets for the women who create it. Was that your
intention?

C.K. The protagonist in Cover the Butter, Kate Cadogan, used her home as a refuge, a domestic haven to escape reality. I believe domesticity can be enormously rewarding and the nurturing involved provide as much job satisfaction as any other career. But—there were too many elements missing in Kate’s life to complete the picture, so in the end, she came to the conclusion that her house was essentially a self-inflicted prison. It took her a long time to realise this, as too many emotional clamps and the dogged control of a narcissistic mother prevented her from escaping.

P.F.: The most powerful relationships Kate Cadogan has seem to be with other women, whether it be the largely negative relationship with her mother, or the support and continuity her friends provide. Do you think that's how it often is for women?

C.K.: Kate Cadogan’s most powerful relationships were certainly with other women, but then again, she had a boorish, sexually peculiar husband, and an ineffectual father, so no wonder! Personally, I think some problems can only be resolved with members of the same sex, and conversations are often far more intimate. However, men can make excellent best friends, too, and I’m sure many negative relationships with the male species can be equally powerful or traumatic.

P.F.: You have a lot of projects going. Is this an especially creative time for you? Can you inspire us with your work habits?

C.K.: I made the decision to concentrate on writing, which meant no more illustrating, as I did have far too many projects going! I wouldn’t advise anyone to work like me. I have a very bad habit of working until 4am, sometimes all night, not wanting to lose the thoughts in my head. It’s not healthy!

Bleary-eyed, I’m now completing my second novel: TARTS AND SINNERS. It features the end of one year and the beginning of another in the lives of Annie Ruddock, age 58, (vicar's wife, in love with a cross-dressing bell ringer;) Jane Frobisher, age 46, (who’s obsessed with chickens, and her husband's having an affair with a woman who looks like Prince Charles’ Camilla;) and Fiona Wiggins, age 23, (who despairs having lost her virginity, and is obsessed with the Fifties.) Mostly set in Tutton Longfield, United Kingdom, is an interwoven tale told from three different points of view.


P.F.: I'm interested in the diary format you chose to use for your novel. Did that help the story flow for you or was it a challenge? Are you a diarist yourself?

The diary format was a challenge, but it helped with the flow and kept the book
organised. No, I’m not a diarist, and dear God, my life is far from organised.

P.F.: You are an accomplished illustrator as well as a writer. Like your novel, your
illustrations are exceptionally detailed. Do you believe that it is through details that the larger picture emerges? 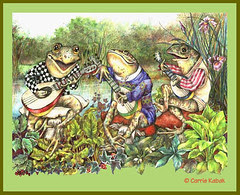 C.K.: Absolutely. I was sure words could be used like a paintbrush, but with writing, I could climb inside the picture too. And live in it. As I write, I enjoy showing a story, creating the atmosphere, but when I’m telling, I imagine the reader is my best friend. I love writing in first person, present tense, so I can really get inside the protagonists headhttp://www.blogger.com/img/gl.link.gif.

P.F.: You grew up in the U.K. and now you live in Missouri. How do you think the coming of age story you tell in your novel would be different if you set it in the U.S.?

C.K.: Gosh, I don’t know—I’ve only lived here for six years, and I’m still learning about my adopted country and its people and society. That would be an interesting question for readers of Cover the Butter!

To learn more, visit Carrie's website.
Posted by Patry Francis at 6:27 AM

I am adding this to my books to read list. How unbelievable lucky to be so talented in two creative arts.

R., you would definitely love this book.

You have an outstanding good and well structured site. I enjoyed browsing through it film editing schools